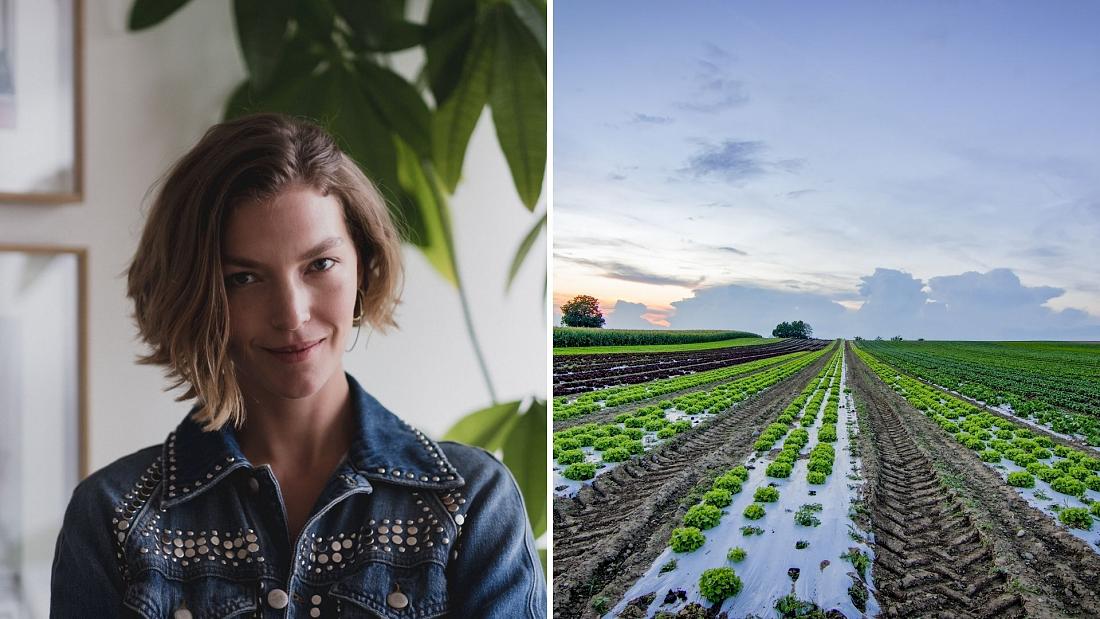 Arizona is a model, environmental activist, sustainability consultant and founder of Dirt, a foundation devoted to biodynamic farming who has fronted campaigns for some of the world’s biggest brands and graced the cover of over 40 international Vogue Magazines. Here she gives us her take on the importance of regenerative agriculture in transforming the fashion industry.

While designers, models and influencers steal the limelight at fashion weeks and dominate Vogue column inches, very few consider the fields and farms at the genesis of our garments.

Most of us have no idea how the cow that produces leather for our favourite bag has been raised, about the health of the soil that grows the cotton for our favourite t-shirts and jeans, or that it is trees that make up the Tencel in our leggings. Consumers, and brands as well, are completely detached from the source of their clothing.

We have lost touch with the fibres that fill our wardrobes and, more importantly, how they impact the health of the planet.

Our attitudes have shifted in what we eat. The farm-to-fork movement has seen more and more people choosing their produce based on geographical origins and environmental implications. Increasingly, we are choosing locally sourced, organic and seasonal ingredients wherever we can.

But when I look at my busy local farmers market, I am often struck that those jostling for biodynamic wine, organic carrots, and free-range fillet steaks have little thought for the nylon, polyester and acrylic – three of the most energy-intensive and polluting materials – that make up many of their outfits.

Fashion’s detrimental environmental impact should not be news to any of us. However, what is perhaps not so well known is how clothing impacts the soil upon which we all depend.

Soil is miraculous. It contains more than three times the amount of carbon in the atmosphere and four times the amount stored in all living plants and animals. Each year, soil removes about 25 per cent of the world’s fossil fuel emissions and sequesters it underground.

What is perhaps not so well known is how clothing impacts the soil upon which we all depend.

But industrial farming practices directly counteract this process, causing carbon to be released from the soil at a faster rate than it is being replaced. Because almost half the land that can support plant life on Earth has been converted to croplands, pastures and rangelands, soils have actually lost 50 to 70 per cent of the carbon they once held.

This has contributed to about a quarter of all the manmade global greenhouse gas emissions that are warming the planet.

70 per cent of the world’s topsoil has now been destroyed, and some studies suggest we only have 60 harvests left. Around the world, 40 million people a year are displaced when their progressively degrading soils get to a point where they are no longer capable of producing any food whatsoever.

Fashion plays a starring role in all of this. Conventional ways of producing natural fibres include deep tilling, mono-cropping (planting a single crop such as cotton), and liberal use of pesticides all of which lead to stripped, depleted soil, which can’t draw down carbon or support biodiversity.

Luckily, there is something we can do to reverse this.

Regenerative agriculture does away with harmful chemicals, strategically arranges plants so they can grow and support each other and uses carefully planned grazing patterns so that animals can fertilise soil.

By mimicking nature, regenerative agriculture rejuvenates land and massively enhances soil’s ability to capture and store carbon. Indeed, if we converted all global croplands and pastures to regenerative organic agriculture, we could sequester more than 100 per cent of current annual CO2 emissions, as well as provide a host of co-benefits for wildlife, food production and water retention.

This has created the opportunity to totally transform the fashion industry.

Rather than just pollute less or do less harm, with regenerative agriculture we can actually have a positive impact on the planet through the production of clothes.

We must watch out for a greater influx of fashion houses co-opting the phrase to suit themselves.

Brands big and small have started to sit up and pay attention. The North Face, Burberry, Timberland, Patagonia, Stella McCartney and Eileen Fisher have all invested in regenerative agriculture. The Kering luxury group, whose houses include Gucci, Bottega Veneta, Balenciaga and Alexander McQueen, was a co-founder of the Regenerative Fund for Nature, aimed at adopting regenerative practices across one million hectares of crop and rangelands.

Allbirds and Oshadi Studio are also both working closely with regenerative farms in an effort to further reduce their environmental impact.

One thing we must watch out for, however, as more and more labels cotton on to the regenerative trend is a greater influx of fashion houses co-opting the phrase to suit themselves.

Greater consumer emphasis on environmentalism and a lack of any guidelines to define certain terms has meant that words like “sustainable” and “eco-friendly” are now thrown around so often they have lost all meaning.

While a broad understanding of different practices that contribute to regeneration is developing, there is no industry standard that defines it exactly. And this vagueness provides a fertile ground for greenwashing. Currently, brands can describe their lines as regenerative while only zeroing in on a small selection of regenerative practices and ignoring others.

I am a firm believer that regenerative agriculture represents the best chance that we have of mitigating the climate crisis.

I am a firm believer that regenerative agriculture represents the best chance that we have of mitigating the climate crisis. But, in order to unleash its true transformative potential at scale, there needs to be a certification body and recognised set of standards that necessitate enhancements to soil health and community wellbeing.

Every time we put on a new outfit, we should thank the farmer that grew it for us. There is no reason the fashion industry should be divorced from natural processes, and none at all that it should rob the soil from which we came, to where we all return.